Edge Chromium: the new browser can also be installed on Windows 7 and 8


It has now been several months since Microsoft began development of its new browser. Gradually the publisher adds compatible systems and offers different test versions. Today it is the turn of old Windows systems.

If the name of the browser remains the same, Edge, it renews itself by modifying the rendering engine that allows you to display web pages to use the same as that of Google Chrome. This forces developers to overhaul the entire browser. A little over two months ago a first version was offered for Windows 10 and just a month ago it was the turn of MacOS systems to be able to install it.

Today, and as Microsoft had indicated, versions for Windows 7, Windows 8 and 8.1 systems are offered. On the page dedicated to downloads of development versions we find a new entry in the "Canary Channel". There are indeed several development channels, that of Canary corresponds to the most unstable versions updated daily. The "Dev" channel versions are updated weekly but only Windows 10 and MacOS are eligible. 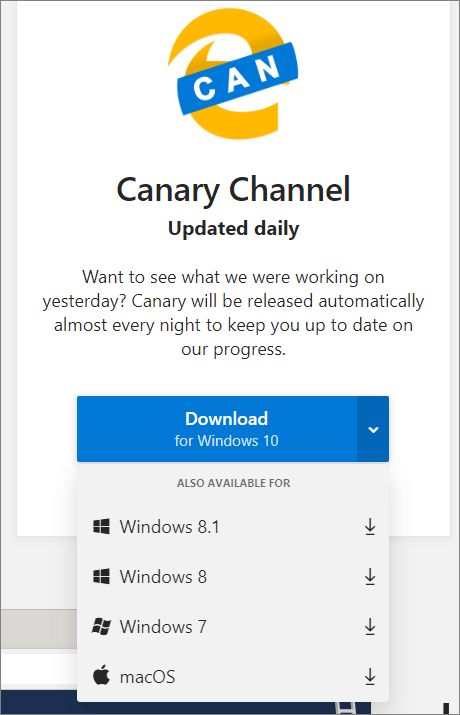 Later the Beta channel will offer the most successful versions which will allow us to finalize the stable versions. However, no date has been given for the finalization of the project.

To explain this choice to modify its browser, which was used very little in its old version, Microsoft had highlighted the advantages regarding compatibility, which would make it easier for web developers. However, it is surprising that a version for Windows 7 is offered when the end of support for this system is scheduled for next January.

add a comment of Edge Chromium: the new browser can also be installed on Windows 7 and 8