Google Play Instant lets you try games before installing them


Do you remember Instant Apps, those instant Android applications that you can access without having to install them on your smartphone? Well, as part of the redesign of the Google Play Games application, announced last Monday, March 19, the Californian giant unveiled Google Play Instant, a sort of extension of Instant Apps but for video games.

Accessible from the Google Play Games app or directly from the Play Store, this feature lets you try out a streaming mobile game before installing it on your smartphone (or checking out). To do this, simply press the new "Try" button, located right next to the "Install" button when you are on the game page. For the moment, only six titles are available, including Clash Royale, Final Fantasy XV or Mighty Battles, but Google will open this system to all developers in the year 2022.

We tested a few games, including Clash Royale and Words with Friends 2, and it worked perfectly. In the case of Clash Royale for example, it was a short demo/tutorial aimed at explaining the game system, but it is up to the developers to choose what they want to put in instant access.

Thanks to Google Play Instant, the Californian firm intends not only to push its instant application technology, but also mobile video game downloads. Indeed, if the latter currently represent 41% of downloads made on the Android Play Store, they nevertheless generate 90% of the platform's revenues according to App Annie and IDC. 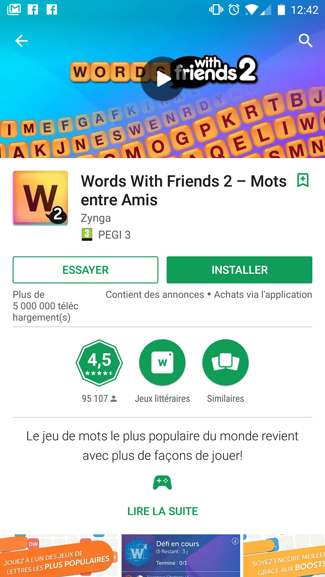