How to get skins in Valorant

Everyone uses the same weapons in Valorant, but that doesn't mean every weapon has to look the same. After all, you're going to be spending a lot of time staring at your gun, so might as well be nice looking.

Luckily, the folks at Riot have the perfect solution for players who need to look their best while taking down their enemies. Skins are cosmetic add-ons that can change the physical appearance of a weapon, as well as animation and audio effects.

Keep reading to find out where to get these unique looks and whether you'll have to play or pay to unlock the customizations.

How to get skins in Valorant?

Unlike other popular multi-shooter games, Valorant doesn't have special skins to modify and customize the Agent's appearance - at least for now. What they offer is a collection of skins that can modify and improve the look and feel of weapons while playing.

They don't necessarily improve your gameplay, but sometimes looking good is enough to win a match, right?

There are several ways to get unlocked skins:

This might be the easiest way to get your hands on the weapon skin you want but don't have time to unlock. Valorant Points or VP are the premium currency used in-game to unlock agents, skins, and more in the in-game store.

Here is an example of converting real money to VP on the North America server:

For reference, the featured collections in the Valorant store are around 7 VP. Individual weapon skins are a bit cheaper and typically range between 100 VP and 1 VP each, with melee weapon skins at the higher end of the price scale.

If you're looking to unlock as many agents as possible, you're probably already in the process of making individual agent contracts. Completing these contracts does more than unlock agents, however. Reaching level 10 in Chapter 2 can also yield a modest collection of Agent-specific weapon skins. And best of all? They are free! 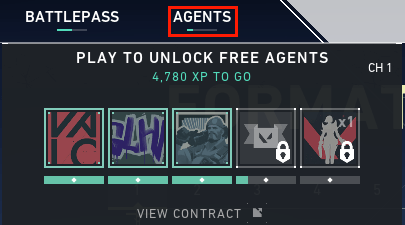 The problem that many players run into is the seemingly insurmountable XP requirement to reach level 10. If you're only counting level six upwards, you're looking at 625 XP to unlock these skins. Another additional problem is that you can't get away with it like you can for Chapter 000.

However, if you're willing to put in the time, these free skin customizations might be worth it.

3. Complete Tiers in a Battle Pass

As always, Valorant is adding a free track and a paid premium track to all of their Battle Passes. If you're a little cash-shy, you can still earn skins by going through the Battle Pass tiers, but if you want to take advantage of all the rewards, you might need to open your wallet. Battle Pass Premium costs around $10 or 1 VP to access the full rewards cycle. 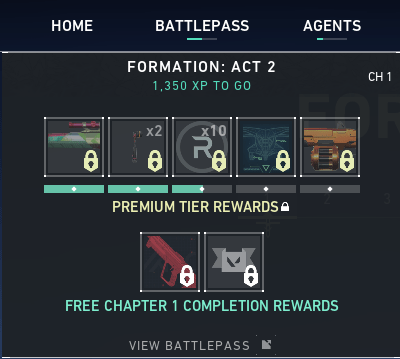 A Word About Radianite Points

Radianite Points (RP) are an in-game currency often earned by completing Battle Pass Tiers and Contracts. You can also buy RP with Valorant Points. While you can't unlock a weapon skin with RP, you can evolve unlocked skins to a new variant - the finisher - and even a weapon animation using this currency.

How to get skins for free in Valorant?

There are several ways to get free skins in Valorant. The first is to complete Agent Contracts up to Chapter 2. These skins are Agent specific if you can level up to Level 10 of the Individual Agent Contract.

The second way to get skins is to take the “free route” when playing a Valorant Battle Pass. You may not have access to all the rewards that premium players get, but you do get quite a few free gifts for leveling up.

How to buy skins in Valorant?

Purchasing skins is one of the primary ways players obtain weapon skins. If you're ready to buy, follow the steps below:

Keep in mind that you should have a PV balance before entering the store. If you need to top up or buy points the first time, here's how:

Generally, the store offers a special collection as well as a selection of individual skins. Additionally, the store stock rotates all four individual weapon skins every 24 hours. So check back in a few days if you don't see the skin you are looking for, as these skins are randomly chosen. You never know what they will offer next.

How to buy non-store skins in Valorant?

Weapon Skin Collections are only available for a limited time in stores, and once they're gone, they're gone for good. Well, for the most part.

If you're looking for reward skins from past Battle Passes, you may be out of luck. Riot may release a new version of a popular skin collection in the future like they did with the Prism collection, but you won't be able to find the original collection outside of rotating stock in the Valorant store.

How to get knife skins in Valorant?

Of the three skin collections, only Kingdom offered a melee weapon skin for players who reached level 50 in Act 1.

So if you miss the occasional melee weapon skin offered in Battle Passes, you can always head to the in-game store. Keep in mind that Skin Collections don't always offer a weapon skin melee. Before buying that pricey bundle, do your research to make sure it includes the skin you want for your weapon.

Otherwise, you'll have to wait for individual rotating weapon skin slots. They are located in the lower part of the store. These weapon skins are randomly picked, so you can find one right away or you might need to check back in a day or two.

How to get Prime skins in Valorant?

The Prime Collection was one of Valorant's first featured packs and was released in June 2022. Unfortunately, if you didn't purchase the pack from the store when the game first launched, you won't be able to get it anywhere somewhere else.

However, Riot has announced that the Prime 2.0 Collection will be released with a Battle Pass Act 2, Episode 2 scheduled to launch in early March 2022. The collection will run in the in-game store at 7 VP and will feature skins for players. following weapons:

All weapon skins except the melee weapon have four variants and four levels that you can achieve with radianite points.

How to get prism skins in Valorant?

Both the original Prism Collection and the revamped Prism II Collection have taken the Valorant community by storm. Nowadays, you will have to try your luck on the rotating selection offered in the store to get your hands on these skins.

Alternatively, if you play the Episode 2, Act 2 Battle Pass, you can receive a Prism III gun skin for free. While you won't have access to a full collection for the new Prism III skin, you will have access to all of the variations this skin has to offer.

Will Valorant skins be kept?

Skins purchased during the beta phase of Valorant did not carry over with the official launch of the game. However, players who purchased skins during this period received a refund in the form of Valorant Points with an additional 20% added for their game support.

How to unlock skins in Valorant?

The easiest way to unlock skins is to play the game. Complete Agent Contracts for character-specific weapon skins and Battle Passes for limited-edition weapon skins. If you're willing to spend some money, you can also buy skins from the Valorant store.

Give your weapon a makeover

Sometimes all you need is a visual pick-me-up to inspire you to win those matches. So the next time you need a weapon makeover, head over to the Valorant store and pick your next look. Remember that weapon skins change often in the store, so if you see one you want, act fast. You never know when it's going to come back.

Do you buy weapon skins or earn them for free? Let us know in the comments section below.

add a comment of How to get skins in Valorant