Chromecast is very intuitive and easy to use, most of the time. There are a few difficulties with this that aren't addressed enough even by official Google support. Many users have a problem with the separation of video and audio on the device.

You can actually play audio through your PC speakers while the video plays on your TV. You can also do this with mobile devices using apps like LocalCast. This article shows you the exact steps to play a video on Chromecast but leave the audio on your PC.

Split video from audio on your PC

To separate video from audio using your computer, you need to "trick" your Chromecast. Essentially, you use your computer's speakers and inputs for audio and microphone. However, you're not recording anything with your microphone, and you don't need an actual microphone for this to work.

Apart from using the microphone as an audio input, you need an HDMI to HDMI + Audio Adapter to extract audio from the Chromecast and use it on another device, such as your PC, laptop or headphones. 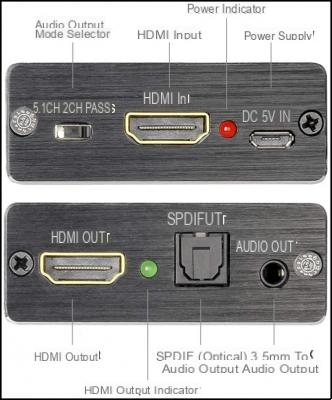 You will only use microphone playback to play media audio that you are streaming through your PC speakers. Here is all you need to do:

Audio from your Chromecast now plays normally, but audio comes out through your computer speakers.

This method has been tested and proven to work on Windows 10 using Realtek HD Audio Manager. However, there's no reason why this trick wouldn't work on a Mac. Finally, if this procedure fails, you can refer to the next method.

Split Chromecast video from audio on your phone

You can cast Chromecast video to your TV and stream audio through your Android or iOS smartphone speaker. You need a third-party application, such as LocalCast. You can download it for free from Google Play Store or Apple App Store.

This app is safe to use and it works well. You can use LocalCast to cast your videos, music, and pictures to a Chromecast device. Also, you can stream many online services like Apple TV, Amazon Fire TV, and Roku and stream your games from an Xbox One. The feature you need for this task is “Rout audio to device”. The option allows the audio to stay on your phone while you cast anything to Chromecast.

Here's how to split Chromecast audio and video on your phone.

Learn more about using LocalCast on Android and iOS

LocalCast has a small team of developers and it's a very useful app. It is supported by advertisements and offers in-app purchases. The only restrictions are that you must be at least 17 years old and have unlimited web access to use this app.

Before installing LocalCast, make sure to update your phone's operating system to the latest version. According to the development team, the app works better on Android devices than on iOS devices. Still, this app is a great tool, and it's worth checking out if you're having issues with Chromecast video and audio splitting.

Sometimes you need a little privacy while streaming. Also, if your TV speakers aren't working, you'll need to pass the audio to another set of speakers. LocalCast is a great solution if you decide to hire your smartphone speaker for work. You can also use your computer speakers if you want more power.