How to subtract in Excel with a formula

Excel is a spreadsheet program that has a plethora of functions. Still, the software doesn't have a subtraction feature, which seems like a no-brainer to include. As such, Excel users manually enter formulas into the function bar to subtract numbers. Here are some of the different ways you can infer values ​​in Excel spreadsheets. 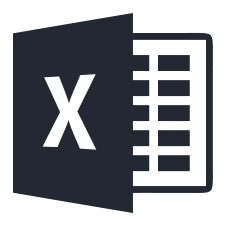 Subtract by including values ​​in the formula

However, most Excel users will need to subtract the numbers entered into the columns and rows of the spreadsheet. To subtract cell values, you'll need to include their row and column references in the formula instead. For example, enter the values ​​"345" and "145" in cells B3 and B4 in a blank Excel worksheet like in the snapshot below.

Select cell B5 and click in the fx bar to enter a formula. Enter the formula '=B3-B4' and press the Return key. B5 will now return the value 200 as shown below. 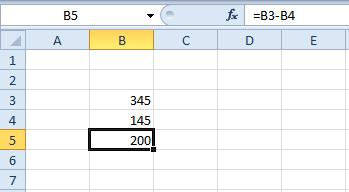 Subtract a number from each value in a range of cells

Copy the formula in D3 to the other cells below by selecting D3, clicking the lower right corner of the cell and dragging it to the ones below as shown below. Now the cells directly below D3 also subtract 5 from the numbers in C4 and C5. 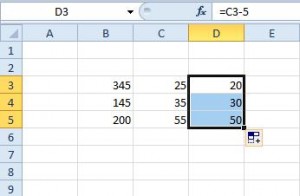 Subtract a cell range total from a single value

What if you need to subtract a column total for a group of cells from a single value? One way to do this would be to enter a SUM function into a cell that sums the range and then subtracts that total with a separate formula. However, you can also subtract a cell range total by including SUM in a formula. 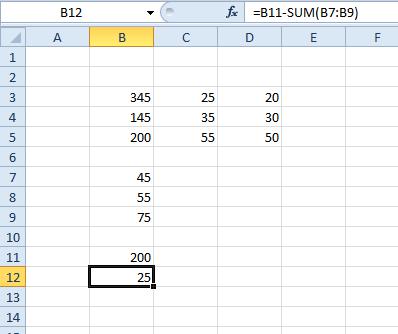 You can also subtract totals from cell ranges without first entering SUM functions in the worksheet. Instead, add cell range references to a formula and subtract them. For example, enter the numbers '25', '15' and '35' in cells C7:C9. You can now subtract the total of cell range C7:C9 from the range B7:B9 entered earlier.

Subtraction of values ​​across multiple worksheets

Excel doesn't limit you to subtracting values ​​in single worksheets. As such, you can subtract cell numbers in one worksheet from those in another. For example, enter "55" in cell B14 on Sheet1 of a spreadsheet. Then click on the Sheet2 tab at the bottom of the application window to open a blank spreadsheet. Enter '5' in cell B3 of Sheet2. So this formula will subtract B3 in Sheet2 from B14 in Sheet1.

Now click on B4 in Sheet2 to add the formula to this cell. Enter the formula '=Sheet1!B14-Sheet2!B3' in Excel's function bar and press Return. Cell B4 will now deduct 5 in the B3 of Sheet2 from the value of B14 in Sheet1. The cell returns a value of, as you probably guessed, 50.

So these were some of the subtraction formulas that subtract values ​​in Excel worksheets. You can copy the above formulas to your worksheets using the shortcut keys Ctrl + C and Ctrl + V and modify their cell references as needed. Check out this Tech Junkie's Guide if you need to subtract dates in Excel.