Install a DVD or CD burner

The presence of a disc burner has now become almost essential on a PC. Who doesn't want to mix their own audio CDs, share their videos or slideshows or simply transfer or archive their data? If your system is a bit old, chances are you only have a CD-ROM or CD-RW drive. Adding a second CD-RW drive or DVD burner is a great way to expand your computer's capabilities without having to replace it. Equipped with two drives, your system will be able to directly burn the contents of one disc to another, which is very practical when copying CDs for backup purposes.

On most PCs, even if it already contains one or even two optical drives, you will have no difficulty in adding a CD or DVD burner. As long as you have a free drive bay accessible from outside the PC and an unused drive slot, your new burner should coexist with the other units without any problems.

The purpose of this guide is to help you install a burner step by step. Depending on the vintage of your system, the steps to follow may be slightly different. So in our example, to better cover possible contingencies, we added a Plextor PX-708A internal DVD writer to two computers of different manufacturers and ages: a relatively old Dell Dimension 4500 and a iBuyPower's new Value Pro XP. Both of these machines already had a CD-RW drive-writer. The steps described below correspond to an installation under Windows XP but the procedure followed would be similar under other recent versions of Windows.

Before making any acquisition, make sure your PC meets the minimum requirements for the drive you want - unless you're willing to accept performance below its rated speed. To fully benefit from the characteristics of our Plextor 8X DVD+R burner, you must, for example, have at least an 800 MHz Pentium III processor and, more comfortably, at least a 4 GHz Pentium 1,6. . If your PC does not meet the requirements, consider choosing a slower unit instead, which will have the merit of costing you less.

Note your PC's IDE cable connections. To do this, turn off the computer and open it. Most PCs can accommodate two optical drives on either of two ATA/IDE channels - with one unit acting as master and the other as slave (ATA/IDE channels are the wired interfaces that allow interconnect the motherboard to hard drives and CD or DVD type units). Follow the path of the ribbon cable(s) leading to your hard drive and optical drive to properly identify their connections. 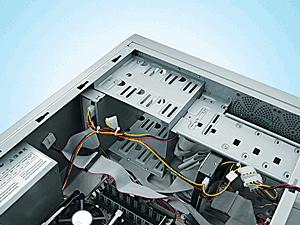 Note the current cable connections between the drives.
Taking a snapshot or two for reference purposes can be a good idea.

Your new drive should be able to operate as a master or slave on one of the channels without any problems. If your configuration permits, and for best performance, set the new drive as master on the secondary ATA channel.

Note:
Taking one or two shots of the inside of the PC gives a view of the initial state, which can be useful later.

Before setting the master/slave jumper on the new unit, examine the positioning of the one associated with the unit already installed in order to know if it corresponds to CSEL (Cable SELect). If so, then only the ATA cable connector determines whether the unit is master or slave. This way of proceeding facilitates the installation and rearrangement of the units without having to worry about their individual definition - master or slave. But there is a counterpart: the jumpers of the two units must be positioned on CSEL and the cable must support this mode. You will probably need to consult your PC's documentation to determine whether its cables support this mode or not. 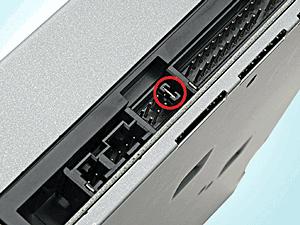 Repositioning a jumper is simply dislocating a small lug
plastic and reseat it on a different set of pins.

The other, safer solution is to set the jumper on one of the units to master and the other to slave. To do this, you will need to take out the existing unit to examine, and possibly change, its jumper position, but the master/slave arrangement is a safe approach. The unit of our Dell system was positioned on CSEL while that of the iBuyPower used the master/slave definition. In both cases, we have chosen to position the jumpers in master/slave mode.

Note:
Most units have a label that specifies the different possible positions of their jumper.

4. Install the new drive in its bay

Before proceeding with the actual installation, consider the best location to use. Moving the old unit can make it easier to reattach to the different connectors.

If you are in any doubt about how to install the new drive into a bay, refer to your system documentation. If you are using a bay for the first time, you may need to remove a cover attached to the chassis (the difficulty of the operation depends on the design of the latter). Most drives are secured in a rack with four screws. On some PCs, the unit is installed on a bracket that can slide out of the bay provided you unlock the tabs. In the case of our test systems, the units were attached to metal brackets by four screws. If possible, use the screws supplied with the new unit. You may need to remove the side panels of the chassis to install the screws.

Note:
If the PC chassis makes connecting cables difficult once the drive is attached to the bay, follow instructions 5 through 7 before installing the drive or insert the drive only partially into the bay.

Which cable connector to use depends on your system configuration and new drive. If you are in master/slave mode, the order in which the connectors are used does not matter. However, it is recommended to use the last connector of the cable to install a master unit which is alone on a channel. 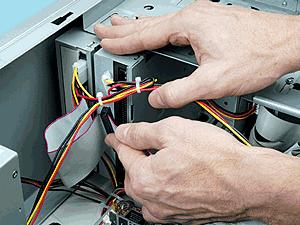 Connect the master and slave units to the same channel cable.

Most ATA interface cables have a red stripe on one side. Connect the cables so that this strip is on the side of the pin numbered 1 on the drive connector - it is closest to the four-pin power connector. Most units and cables are designed to allow only this positioning.

Note:
Use the ribbon cable that came with your PC unless there are good reasons not to. Some units including ours are supplied with 40 conductor cables which do not support the CSEL option. (See “Choosing the Right Cable” below.)

Now snap on one of the power supply connectors - white four pin - still unused. It is designed to only fit the correct way. If you don't have such connectors available - which is quite unlikely - buy a Y-splitter from any PC hardware store.

Many older systems require connecting the four-pin analog output of the optical drive to the sound card. This approach, which in most cases provides good audio quality, is not ideal, however, since PC optical units generally do not include a hi-fi quality digital-to-analog converter. Some sound cards and most current optical units allow a digital connection between these two components but this is rarely used.

Most newer systems skip the audio cable. Recent versions of Windows indeed support sound reproduction of audio CDs using digital audio extraction; the PC reads the data in digital format directly from the CD and takes care of the conversion to analogue. The downside to this solution is that the headphone jack on the front panel of the optical drive does not work when playing a CD.

On our test systems, which already used the digital reproduction of audio CDs without problems, we installed the new burner without an audio cable. If your current optical drive has an analog cable plugged in and you want the same type of connection for the new unit, you may need to purchase a Y connector; most sound cards have only one analog input.

After checking the various connections one last time, turn on your computer. To verify that Windows has recognized the new drive, click My Computer and look for a new icon under "Devices that use removable media." In its absence, reboot the system and activate the PC CMOS setup program following the manufacturer's instructions. Check that both ATA channels have been activated and that the master/slave positions are correct.

Windows XP will probably enable digital rather than analog playback for audio CDs by default. To verify or change this definition, right-click on My Computer, then choose Properties > Hardware > Device Manager. Click on the + sign preceding the line “CD-ROM/DVD-ROM drives”; then right-click the entry for the new burner and choose Properties. In the window that appears, click the Properties tab and make sure the option “Enable digital audio CD playback on this CD-ROM drive” is checked.

Note:
If you want to disable digital audio CD playback, you will need to do so not only in Device Manager but also in Windows Media Player.

Choose the right cable
CD and DVD burners are usually supplied with ATA flat cables, but it is better to prefer those already installed in your computer. Some units, including the Plextor PX-708A used for this article, feature 40-conductor cable that does not support CSEL mode, while 80-conductor cables do.

Whether 40-conductor or 80-conductor, ATA cables use the same 40-pin connectors. The extra 40 wires in 80-conductor cables alternate with those carrying the signals, there are more ground conductors used for shielding to prevent cross interference. The quality of the transmitted signal is significantly improved and transfers are more reliable and faster than with 40-conductor cables.

How to recognize an 80 conductor ATA cable? The easiest way is to count its streaks. But it is also possible to carry out an identification thanks to the color code. The master drive connector at one end of the cable is black; the one for the slave unit, placed between the two extremities, is grey. As for the blue connector, it attaches to the motherboard. But beware ! When the connectors are mated together, the visible portion of each is usually black; it is therefore necessary to uncouple one or two of them to see which color code uses the installed cable, and is accordingly if it is an 80 conductor.

CD and DVD burners don't work fast enough to warrant the use of 80-conductor cables, but these can somehow improve performance without interfering with transfers. 80-conductor cables are required for hard drives that use Ultra DMA modes 3 through 6 while optical drives best use mode 2 (33,3 MB per second). The higher the Ultra DMA mode number, the faster the potential throughput; most hard drives on the market today support mode 6. If you want to connect a hard drive and your CD/DVD writer to the same channel - which is undesirable - you will need an 80-conductor cable so that the hard drive can run at over 33,3MB/sec.

In summary, if you're only connecting optical drives to one cable, you don't need to buy an 80 conductor; but if your PC or new burner provides one, feel free to use it.

add a comment of Install a DVD or CD burner