Install two systems on one PC

Why limit yourself to a PC with Windows as the only operating system? Nothing actually prevents installing a second one. No need to buy a new computer but to use the dual boot possibilities offered by all machines, whether portable or desktop. It is enough to partition the hard disk, provided that it is large enough, at least 6 GB, and to install a new operating system on it. Those who dream of trying Linux or a different version of Windows just have to let themselves be guided. All that remains is to have backup software, a partitioning program, an emergency boot or emergency repair diskette and the operating system in question. The operation is carried out in five stages and takes about an hour.

Back up your PC content. Essential precaution before undertaking any slightly delicate operation, in particular the creation of partitions on a hard disk, that is to say its division into two or more smaller virtual disks. Any incident during the process that may accidentally cause the contents of the disc to be lost. So plan to invest in a dedicated utility, a hardware backup solution like a Zip drive, or full-featured backup software like GoBack. Also, make sure you have an emergency boot or emergency repair diskette in case the situation becomes desperate.

To create a boot disk in Windows 98 or Me, insert blank media into the drive. From the Start menu, at the bottom left of the Desktop, select Settings, Control Panel, Add/Remove Programs, then click on the Startup Diskette tab, in the window that opens, and on the Create Diskette button . Follow the instructions that appear on the screen.

With Windows 2000 or XP, click on Start then on All Programs, Accessories, System Tools, Backup. In the window that appears, select Emergency Repair Disk. And again, follow the instructions.

Clean up your disk. When you partition your disk, you cut it into smaller virtual disks and therefore have less room for applications and the operating system. To make sure you don't run out of space, clean up your disk. Get rid of files you no longer need: empty the trash, delete your browser's history and temporary internet files, uninstall apps you no longer use. You can also analyze hard disk status with ScanDisk, the Windows built-in utility. You should finally defragment the latter to ensure that it works at maximum efficiency.

Partition your disk. In a dual-boot environment, each operating system needs its own physical disk or virtual disk (partition). If your disk has a capacity of at least 6 GB and you don't want to buy a second one, partition it into smaller sections. Windows 95, 98 and Me include a utility called FDisk (found in the C:WindowsCommand directory as Fdisk.exe) for this purpose. With Windows 2000 and XP, select Control Panel, Administrative Tools, Computer Management, Storage, Disk Management. However, these utilities have the disadvantage of creating partitions by erasing the contents of the disk. For this reason, we recommend that you do not use them and prefer software such as PartitionMagic or System Commander instead. These share a disk without damaging the data and applications it contains; they also facilitate communication between operating systems present on the same computer. 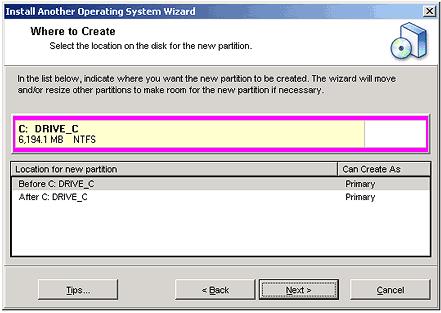 If you want to exchange data and applications on your dual-boot system (as you can between Windows 98 and Windows 2000), you must choose a compatible file system for both partitions. In the latter case, it is FAT32. For dual boot between Windows and Linux, one of the partitions must be Linux Ext2. Consult the documentation that accompanies the partitioning software about possible configurations or refer to the table below.

Install your operating system(s). If you are using partitioning software and your computer originally had a simple boot of Windows 95/98, you only need to install Windows NT or 2000, OS/2 or Linux in the new partition. Both System Commander and PartitionMagic (and its BootMagic disk management software) will guide you to install the new system in the newly created empty partition.

If no system is installed and you want to dual boot Windows 2000 or XP with an earlier version of Windows, be sure to install the older operating system first. Windows 95 or 98 must reside in the first partition of the hard disk. To dual-boot Linux or another Unix system with Windows, use disk management software such as BootMagic for installation.

add a comment of Install two systems on one PC