At the beginning of October Microsoft had caused a sensation by unveiling a computer of a rather special format with two 9-inch screens separated by a hinge: the Surface Neo. At the same time, the new Windows 10X operating system was also presented to make it work. A document reveals that it could well be used on more traditional devices.

The document had been spotted by WalkingCat, which broadcasts its findings via its Twitter account. Now inaccessible, it was however able to be dissected by the German site DrWindows.de. We learn that the new OS is not only designed for the Surface Neo or foldable screen computers but also for traditional laptops equipped with a touch screen.

Many details are also revealed on the design of the system. This should be as unobtrusive and responsive as possible, as is the case with smartphone operating systems. Wake up should be instantaneous and user identity verification automatic through Windows Hello without having to take action to access the lock screen as is the case for Windows 10.

On the other hand, the start menu and the taskbar change appearance. The first is replaced by a "Launcher", an application launcher, to allow the user to start new tasks or resume an action in progress quickly. 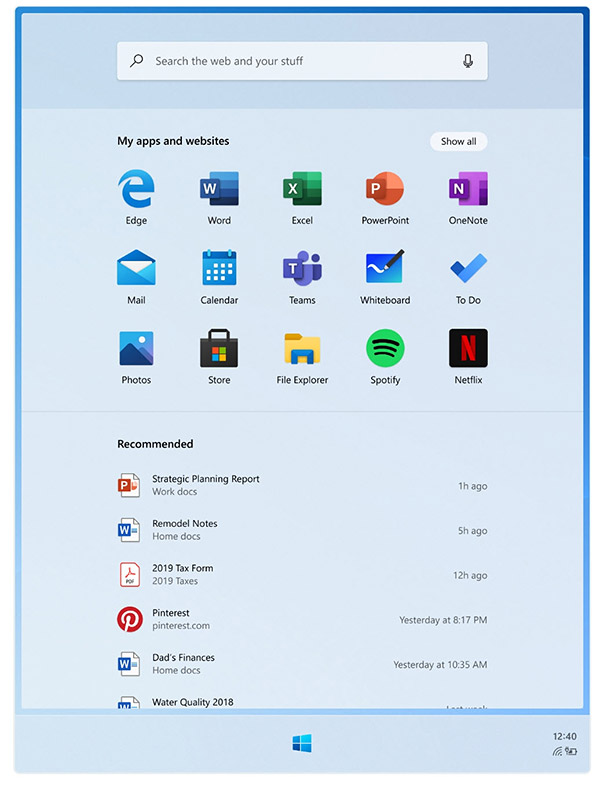 The taskbar with its centered icons allows you to juggle the applications in use but also to start new ones or access a website.

Quick actions will be available for the user to access the most frequent settings quickly without being distracted by the presence of many other parameters. The document lists those that are offered by default such as the activation or deactivation of Wifi or mobile data, Bluetooth, the input method, blocking of automatic rotation or airplane mode.


The Windows 10X system as described therefore contrasts with the operation of the classic Windows 10 system to be closer to a system closer to that of smartphones and tablets. Still under development Windows 10X is not expected before the end of the year when the Surface Neo arrives and other developments should be unveiled by then.