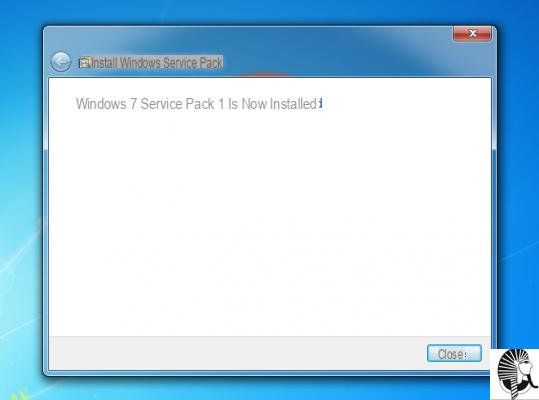 Microsoft has made available for download for everyone the final version of its first service pack, Windows 1 SP7. We have already had the opportunity to talk about this major update on several occasions, especially when the beta versions were released. . Here is a reminder with the 10 things to know about Windows 7 SP1.

For Windows 7 users, SP1 will not change the way you use your computer. The service pack combines a set of updates, security patches or bugs into a single file. Microsoft also announces "improved reliability when connecting to HDMI audio devices, printing using an XPS viewer, and restoring previous folders in Windows Explorer after restarting."

The easiest way to recover and install Windows 7 SP1 is to use the Windows Update service. It is accessible via the Windows Start menu > All Programs or via the Control Panel > System and Security. This is Microsoft's recommended method and will take the least amount of space on your hard drive. You can also retrieve the service pack from the Microsoft site or via our software library in the form of an ISO image to burn (with Nero or InfraRecorder burning software, for example): Download Windows 7 SP1.

How to block the installation of Windows 7 SP1?

What is the minimum configuration to use Windows 7 SP1?

No additional minimum configuration is required. However, you must have a registered version of Windows 7 and the necessary disk space.

How much disk space is needed to install Windows 7 SP1?

Which version of Windows 7 SP1 should I use?

What precautions should I take before installing Windows 7 SP1?

Before installing SP1, Microsoft recommends backing up your data to an external drive (DVD, hard drive, or removable media). Uninstall the beta or RC service pack first if you have installed these versions. Temporarily disable your antivirus and re-enable it after the installation is complete so as not to slow down the update process and avoid a possible conflict. For laptops, make sure they are plugged into an AC outlet and not a battery before starting the Windows 7 SP1 update.

How do I check if SP1 is installed on my computer?

Click on the start button of the Windows menu then right-click on "computer" and choose "Properties". In the general information, under "Windows Edition" the mention "Service Pack 1" is displayed when it is installed.


Should I uninstall Beta or RC before installing Windows 7 SP1?

Yes, the beta and RC versions of the service pack must be uninstalled before proceeding with the installation of Windows 1 Service Pack 7. Go to the control panel, click on Programs and on Programs and Features and finally on "View updates". Find the entry "Service Pack for Microsoft Windows" and click Uninstall.

Should I install Windows 7 SP1 on a computer purchased after February 22?

Check with the method described above if the service pack is already installed, some computer manufacturers have indeed received a version in advance to integrate Windows 7 and its SP1 directly on the computers.

add a comment of Windows 7 SP1: 10 things to know before installing