Windows 8 OEM: can you buy it to install it yourself? 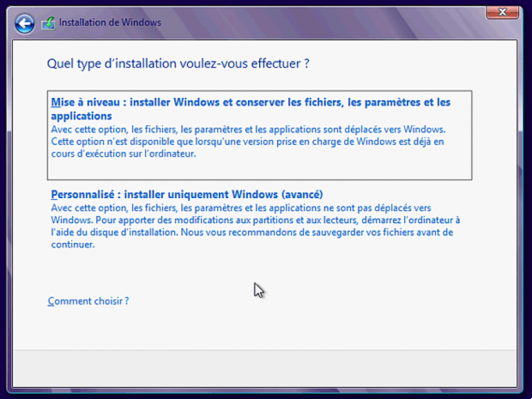 Windows 8 does not officially come out until October 26, 2012, but retailers are already registering pre-orders. There are 32 and 64-bit versions, "home" versions and Pro versions, all in updated or OEM versions, but no trace of the box versions. These will be replaced by the OEM versions

OEM (Original Equipment Manufacturer) versions were usually provided by resellers to be installed on a single computer (assembled or not by the customer) without the possibility of reusing the license on another computer and without support from Microsoft. With Windows 7 and earlier systems, a full boxed version without these limitations was also offered as an alternative. In both cases, and in fact, the user had the option of ordering and installing a Windows system himself.


No installation of Windows 8 by an individual

We asked a Microsoft employee about the absence of box versions of Windows 8 and the possibilities of installation on a new PC with "home-made" components. The answer, confirmed several times to our astonishment, is very clear: apart from the updated versions from an old Windows system, individuals will not be able to install Windows 8 on an assembled PC without going through a reseller. approved.

A few days before the release of Windows 8, this is enough to worry the many DIY fans for whom building a PC yourself is the only option. Same problem for those who intend to use Windows 8 in a virtual machine or in dual-boot with Windows 7, Vista or XP.

This statement is all the more astonishing given that contradictory information was published on the official Windows blog in July: "if you are not updating from an older version of Windows and you are assembling your PC or installing Windows 8 in a separate virtual machine or partition, you will be able to purchase and install Windows 8 and Windows 8 Pro System Builder version". In other words, an OEM version.

What are the resellers saying?

The Windows 8 product sheets for pre-order from resellers seem to confirm the version of the Microsoft employee and contradict the official blog. The boxed versions of Windows 8 are absent and the OEM versions include notes along the same lines at the bottom of the page: "This product is only intended for pre-installation by system manufacturers" or "The OEM license must be installed by a system manufacturer within 90 days of purchase of the customer system."

We questioned the online stores LDLC.com and Materiel.net as a customer to have confirmation and the sounds of the story are very different. The rather restricted possibilities according to the texts and the Microsoft trainer would on the contrary be much more numerous and the licenses more flexible.

For LDLC.com, OEM versions of Windows 8 can be sold with or without a hardware purchase. The limitations mentioned in this text were already in effect with Windows 7 but these limitations are never applied by Microsoft. The OEM versions would replace the box versions and are also transferable in the event of a change of material. A possibility confirmed by our colleagues from ZDNet.com who dissected the license.

For Materiel.net same version with one clarification: buyers of OEM versions who could not benefit from Microsoft support will now be able to access it. A doubt remains, however, about the presence of a box version, the retailer could not tell us that there would not be any after October 26th.

Little room for such limitation

Why then such information from this Microsoft employee? If we exclude the possibility of a simple error on his part, the trainer, in charge of training resellers and not of producing information for users, perhaps had the mission of revealing a final license version different from that which the 'we discovered with the Preview versions.

In this case, by depriving users-assemblers of PCs the possibility of installing Windows 8 themselves, Microsoft would alienate a community of experienced and influential users on the choices of those around them. A risk that Microsoft is unlikely to take given the work done and the issues related to the release of Windows 8.

add a comment of Windows 8 OEM: can you buy it to install it yourself?